VANCOUVER: The Justice Centre today announced that the British Columbia College of Nurses and Midwives (BCCNM) has dropped a charge against Amy Hamm, a Vancouver area nurse accused of making statements with “medically inaccurate information” while defending sex-based rights.

An investigation was launched by the BCCNM in November, 2020, in response to public complaints about Ms. Hamm’s ‘gender critical’ opinions and comments. This followed her involvement with an “I ♥ JK Rowling” billboard display in Vancouver, endorsing Ms. Rowling’s support for sex-based rights.

Gender critical feminists typically argue that while transgender individuals have the right to live their lives with dignity and without harassment, self-identifying as transgender does not equate to literally changing sex. Confusing sex, which is a biological classification, with self-identified gender, in the view of gender critical feminists, poses a risk to women’s sex-based rights, particularly in vulnerable settings where females have an expectation and need for same-sex privacy and protection, such as women’s prisons, changerooms, and rape shelters. Women’s sports are another area where the implications of the biology-versus-gender debate have a real world impact, gender critics note.

In Ms. Hamm’s case, the BCCNM Inquiry Committee referred the matter to a Disciplinary Panel. A hearing was originally set for spring of 2022, but has been adjourned to fall 2022.

The charge, also known as a citation, against Ms. Hamm was served on April 1 and posted publicly on the BCCNM website. It alleged that the nurse:

“…made discriminatory and derogatory statements regarding transgender people, some of which statements included medically inaccurate information, while identifying yourself as a nurse or nurse educator. These statements were made across various online platforms, including but not limited to, podcasts, videos, published writings and social media.”

Ms. Hamm and lawyers Lisa Bildy and Karen Bastow began preparations to respond to this allegation, however on June 28, 2022, the BCCNM served and publicly posted a revised citation removing the charge against Ms. Hamm for making “medically inaccurate” statements.

“Between approximately July 2018 and March 2021, you made discriminatory and derogatory statements regarding transgender people, while identifying yourself as a nurse or nurse educator. These statements were made across various online platforms, including but not limited to, podcasts, videos, published writings and social media.”

In the weeks leading up to this change in the citation, a group called the Vancouver Lesbian Collective began a postcard campaign addressed to the BCCNM, in support of sex-based rights and Ms. Hamm. It is not known what impact, if any, the campaign may have had. 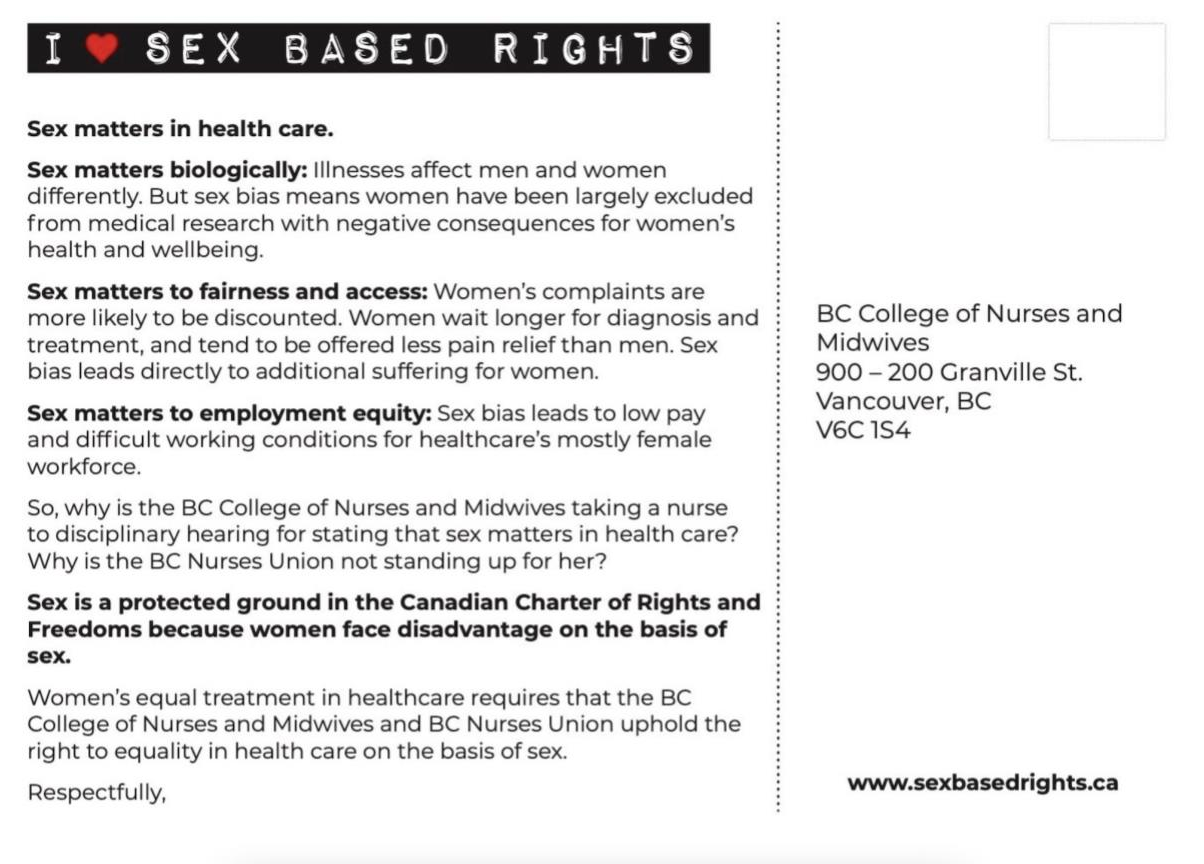 The hearing will now be conducted by videoconference, from September 21 to 23 and October 24 to 27, 2022, commencing at 10:00 a.m. Anyone interested in attending the hearing must pre-register by Sept. 13, 2022 by emailing inquiry@bccnm.ca. Space is limited and hearing schedules are subject to change.

The Justice Centre is concerned that regulatory bodies across Canada are increasingly policing the speech of professionals with threats of disciplinary action. “The College is tasked with keeping patients safe and regulating the profession in the public interest. Their job is not to give social justice activists a tool for ‘cancelling’ people with whom they do not agree or who have opinions outside of a narrow orthodoxy,” said Ms. Bildy.

“Professional governing bodies are created by statute and are therefore subject to the Charter of Rights and Freedoms. Freedom of speech, thought, belief, opinion and expression are Charter rights belonging to all people, even health professionals,” Ms. Bildy adds.

“This case will set an important precedent for regulated professionals who engage in the public square in policy debates which may be contentious, as it seems virtually everything is in these times,” concludes Ms. Bildy.