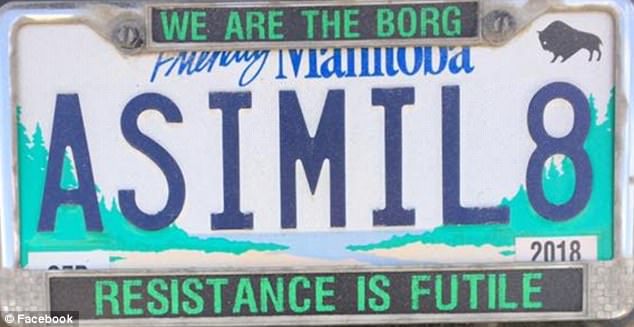 Mr. Troller, an enthusiast of Star Trek, applied and paid the required fee to receive the personalized licence plate “ASIMIL8” in 2015.  MPI approved his application and issued the plate.  Mr. Troller installed the plate on his family vehicle, along with a licence plate border that stated “WE ARE THE BORG” and “RESISTANCE IS FUTILE”.  The plate and accompanying border are a reference to Star Trek.

As stated in his filed Affidavit, Mr. Troller has been approached by many people commenting positively on the plate and asking for pictures with it.  The plate was renewed by MPI in 2016 without question or concern.

The Justice Centre wrote to MPI on May 29, 2017 demanding that it reinstate Mr. Troller’s licence plate no later than June 9, 2017. MPI responded on July 7, stating it was “unable to reinstate the plate as requested”.

Nicholas Troller seeks a declaration from the Court that MPI’s decision to revoke his personalized plate is a violation of his Charter-protected right to free expression. The court application further seeks reinstatement of Mr. Troller’s plate, and/or a quashing of the initial decision to revoke.

Mr. Troller has first-hand experience with the unreasoning grind of bureaucracy, noting in his Affidavit:
The irony of the rescission of my freedom of expression is not lost on me: I have been assimilated by the bureaucratic machine. The expression on the Plate has been subsumed and erased. Like the Borg, MPI is vastly more powerful than I. And like the Borg, it feels no need to explain itself to the people in its path when it suddenly reverses course.

“MPI is a provincial Crown corporation. As a government body, MPI is bound by the Charter and required to respect freedom of expression,” stated Justice Centre president John Carpay. “MPI’s revocation of the plate is arbitrary, oppressive, inconsistent, and unreasonable,” continued Carpay.