The Justice Centre has written to the Nova Scotia Registrar of Motor Vehicles (the “Registrar”) requesting that it reinstate the personalized licence plate of Lorne Grabher, whose surname was deemed too “socially unacceptable” for the road. 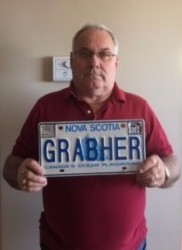 Lorne Grabher, of Dartmouth, NS, first purchased the personalized licence plate as a gift for his late father in 1991.  It has since become a source of family pride, spanning three generations – Grabher’s son has the family name on his own personalized Alberta license plate.

Mr. Grabher received a letter dated December 9, 2016, from the Registrar of Motor Vehicles which stated that a complaint had been received regarding his personalized license plate. As a result of the complaint, the Registrar decided to cancel Mr. Grabher’s plate, despite acknowledging it was an explicit reference to Mr. Grabher’s surname. The reason provided for the cancellation was that the plate could be “misinterpreted” as a “socially unacceptable slogan”.

In its letter, the Justice Centre calls out the Registrar’s decision as “discriminatory,” “arbitrary,” “unreasonable” and in violation of free expression as guaranteed by the Canadian Charter of Rights and Freedoms. It further states that the decision is “an affront to the dignity of Canadians, and particularly those Canadians who are not of Anglo-Saxon descent.”

“Pandering to an unreasonable complaint and canceling our client’s plate perpetuates misunderstanding, subverts the dignity and heritage of our client and many other Canadians, and violates the freedom of expression protected by the Charter,” continued Carpay.

The letter requests that the Registrar reinstate Mr. Grabher’s personalized licence plate, listing his surname, no later than Thursday April 6, 2017.

“If by April 6, 2017, you have not provided us with written confirmation evidencing your commitment to reinstating the license plate, our client will have no choice but to take further steps to assert his legal rights,” concludes the letter.